Hilbert bases were introduced by Giles and Pulleyblank [1] as a tool to study total dual integrality. They are often nicer to work with than arbitrary sets of vectors.  For example, from the computational perspective, membership testing can be much easier for the cone and lattice than for the integer cone.

Given a graph $G$ (or matroid), we may regard subsets of $E(G)$ as characteristic $(0,1)$-vectors. In this way, we can ask whether a family $\mathcal{S}$ of subgraphs of $G$ is a Hilbert basis. In the case that $\mathcal{S}$ is the set of circuits of $G$, there is the following nice theorem of Alspach, Goddyn and Zhang [2].

Theorem 1 [Alspach, Goddyn, Zhang].  The set of circuits of a graph $G$ is a Hilbert basis if and only if $G$ does not contain the Peterson graph as a minor.

From the matroidal perspective, the difference between circuits and cuts is superficial, so it is very natural to ask the following question. 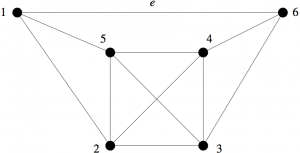 In a recent paper of Deshpande, Goddyn and myself [4], we prove that all graphs without a $K_{5}^{\perp}$-minor are cut-Hilbert.

Note that Theorem 4 is in stark contrast to Theorem 1, where there is an exact excluded-minor characterization for the class of circuit-Hilbert graphs.

I will now give the examples that establish Theorem 4.

Three different weightings of a non-cut-Hilbert graph $H_1$. Black edges all have weight 1.

Consider the three edge-weightings of the above graph $H_1$.  For a simple graph $G$, it is easy to show that a vector $x \in \mathbb{Z}^{E(G)}$ is in the lattice of cuts of $G$ if and only if $x(C)$ is even for every circuit $C$ of $G$.  One easily checks that this condition holds for each of the above three edge-weightings.  Furthermore, one can also write (but for the benefit of the reader we will not) each of these vectors as real non-negative combinations of cuts of $H_1$. On the other hand, none of these vectors is in the integer cone of cuts of $H_1$ (this is just a (large) finite case check).  This last claim was verified by our silent robot partner Normaliz [5], but can also be checked by humans (as we do in the paper). Therefore, $H_1$ is not cut-Hilbert.

Three different weightings of a non-cut-Hilbert graph $H_2$. Black edges all have weight 1.

I will finish by discussing the matroid analogue of Question 2.

Question 5.  For which matroids $M$ is the set of cocircuits of $M$ a Hilbert basis? 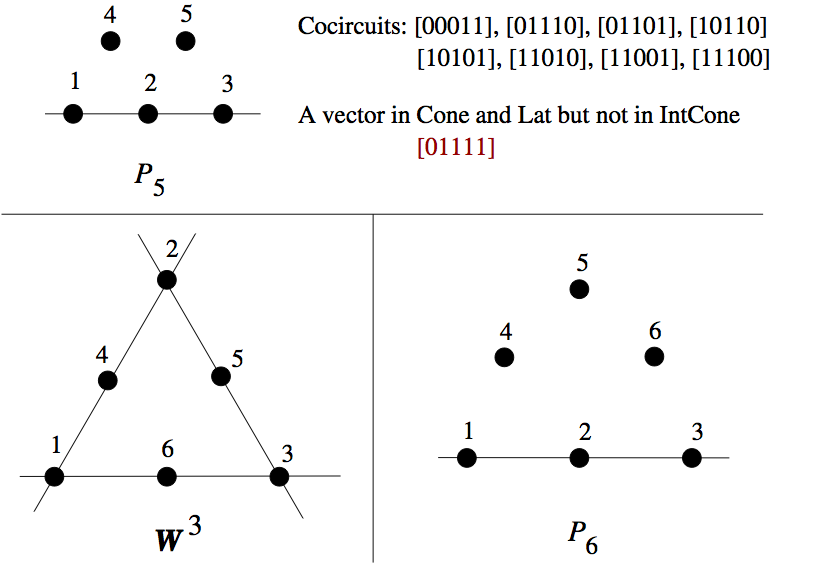 If one restricts to binary matroids, then the situation is more manageable. There are only two binary non-cocircuit-Hilbert matroids up to 8 elements, and interestingly, both of them are coextensions of the Fano matroid.  Therefore, the following problem may be doable.

Problem 6.  Characterize the binary matroids whose set of cocircuits is a Hilbert basis.

Note that Problem 6 is open even for graphs.  By Theorem 4, the set of cut-Hilbert graphs is not closed under taking minors, so it does not have an excluded-minor characterization. However, perhaps there is an alternate nice characterization.

2 thoughts on “Hilbert Bases of Cuts and Cocircuits”

This site uses Akismet to reduce spam. Learn how your comment data is processed.